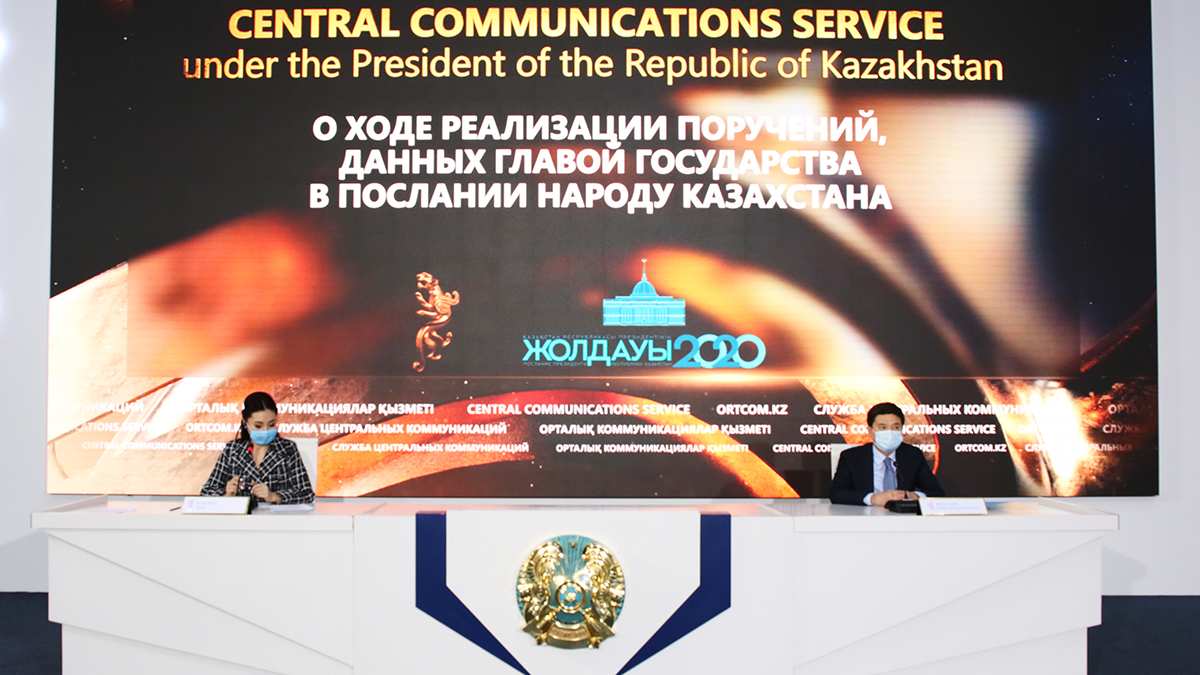 At an online briefing Minister of Justice Marat Beketayev reported on the implementation of the instructions given by the Head of State Kassym-Jomart Tokayev in his address to the people of Kazakhstan.

The Head of State in his Address of Sep. 1, 2020, "Kazakhstan in a New Reality: Time for Action" noted the need to address a number of issues in the field of public administration, healthcare, education, socio-economic and other issues.

First, taking into account the experience of the pandemic, the Head of State was instructed to develop mechanisms aimed at ensuring a balance between the levels of legal regulation.

The president noted that the excessive legislative regulation of the activities of the executive branch hindered a prompt response to the problems that arose, therefore, it was instructed to consider this issue within the framework of the Concept of legal policy.

“Speaking about preliminary approaches to the implementation of this task, it is planned to conduct an audit of legislative acts to identify detailed rules that will be revised in order to ensure flexible regulation in specific legal relations,” the minister said.

Second, the task was set to develop approaches to ensure the stability of criminal and criminal procedure legislation.

For this, the Ministry of Justice, together with law enforcement agencies, is working to develop appropriate mechanisms to ensure stability.

For example, a reduction in the frequency of amendments to the Criminal and Criminal Procedure Codes can be achieved by strengthening the mechanisms for elaborating proposed initiatives in this area.

Third, together with the authorities concerned, work is being carried out to clarify the concepts of "administrative" and "criminal" offense.

The new concept of "administrative offense" should serve as a criterion:

Fourth, the Head of State separately noted the need to ensure the equality of the rights of a lawyer and a prosecutor in court proceedings.

In pursuance of this assignment, together with the lawyers' community, amendments were developed, included in the draft Law on the issues of advocacy and legal assistance, which will expand the powers of advocates in court proceedings.

The draft law is under consideration by the Majilis.

“It should be noted that the Ministry of Justice has also been identified as a co-executor for 43 measures, within the framework of which we provide comprehensive legal support to responsible government agencies, as well as participate in the development of relevant proposals,” Beketayev said.

Time dictates its own rules in legal sphere

Answering journalists' questions, the minister spoke about the need to ensure the stability of criminal and criminal procedure legislation and its implementation.

So, according to the minister, criminal law is the tools that the state uses when it is necessary to fight crime. That is, the policy pursued by the state to combat crime is reflected in the criminal and criminal procedure codes, as well as in the criminal executive code.

“The state should clearly give signals to the society about what policy it is pursuing. If these signals are frequent, they change, then the signals are inaccurate and not very easy to understand at times. It is also very important for law enforcement. Law enforcement and judicial authorities must apply the criminal, criminal procedure, and penal codes in the same way. And frequent changes get in the way of uniform enforcement. Therefore, we are talking about stability in order for us to come closer to the standards of the rule of law,” Beketayev said.

The Ministry of Justice proposes to develop the following mechanisms. Any changes must be widely, publicly discussed with all interested parties, so that everyone has the opportunity to express their point of view and so that there is an opportunity to hear this point of view.

Speaking about the correlation between by-law regulation and the establishment of norms at the level of law, Beketayev turned to the modern history of Kazakhstan. He noted that there was a period when there was a need for regulation at the level of laws. There were laws of direct action, when judges, law enforcement officers used the norms of the law directly. But this presupposed that the laws must be very detailed, it was necessary to prescribe certain situations in the law to the smallest detail. This was necessary due to the breadth of discretionary powers of law enforcement officers. It was possible to apply a harder, softer sanction, or in a specific situation to make a decision. To reduce this discretion, such approaches have been used.

“Life dictates its own rules. It is now clear that technologies, events are developing rapidly, again, the pandemic has shown certain things. The understanding comes that it is necessary to maintain a certain flexibility. Especially to ensure the speed of decision-making, especially in crisis situations. The President of the country gave the corresponding instruction. This balance must not be lost: on the one hand, decisions need to be made quickly, on the other hand, it is necessary to ensure the stability of legislation,” the minister said.

At the moment, the Ministry of Justice is working together with other ministries to develop new approaches. Among them — monitoring by each state body in the area of ​​its regulation, the introduction of mechanisms to ensure transparency in the decision-making process.

Rights of lawyers to be expanded

Beketayev told how the new draft law on advocacy and legal assistance, which is currently being considered in the Majilis, improves the position of lawyers. Thus, according to him, several amendments proposed by the deputies suggest expanding the powers of lawyers. In particular, it is proposed to provide lawyers with access to the materials of the investigation at earlier stages of the criminal process. These amendments are under discussion. But in general, the message is already clear. It is about strengthening the powers of lawyers. We are also talking about the powers of legal advisers.

“On some issues, legal advisers have a less wide scope of powers compared to lawyers. We propose to supplement this volume. There is also the question of introducing the introduction of responsibility for obstructing the activities of legal advisers,” the minister said.

New parties must declare themselves

Beketayev also gave explanations regarding the registration of parties before the election campaign.

This is a bill, which was proposed by the Akzhol party, stating that such parties, which are already in Parliament, but do not have a majority, had guaranteed quotas for chairmen and secretaries of committees.

As for registration of opposition parties, according to Beketayev, there were applications.

He also stressed that the creation of parties is a very complicated and expensive process.

However, according to Beketayev, according to the law, it is impossible to announce how many parties have submitted applications, who exactly has submitted. Because this is only the right of the group of people who initiated this application. The Ministry of Justice cannot disclose such information.

Meanwhile, Beketayev believes that in Kazakhstan there are no opposition and non-opposition parties. There are political parties, and what program, what goals they set for themselves, it is their decision. Any party is political, it determines its program independently, forms its views independently. But those parties that have declared and that exist will participate in the elections.