Amendments to law, social payments to electronic wallet and use of pension savings — how Ministry of Labor implements instructions of the Head of State 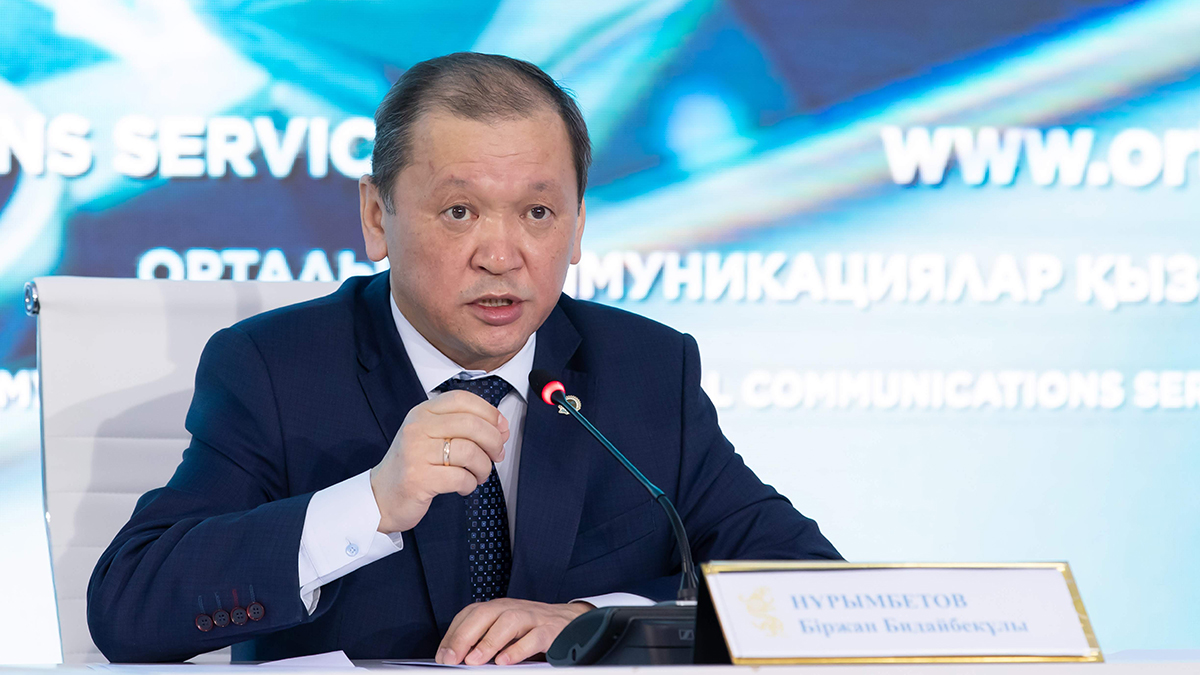 Minister of Labor and Social Protection of the Population Birzhan Nurymbetov spoke at a briefing about the implementation of the instructions given by the Head of State in the Address to the people of Kazakhstan dated Sep. 1, 2020.

At the beginning of his speech, the minister noted that of all the instructions of the Head of State, voiced in the Address, the most attention of citizens was attracted by the option of using part of pension savings for targeted needs.

“On behalf of the Head of State, the government, together with the National Bank, have developed approaches to using part of pension savings to improve housing conditions, pay for expensive medical treatment or transfer them to private management companies. The developed approaches were approved by the Head of State. In order to implement them, relevant amendments to the legislation have been worked out within the framework of the draft law ‘On Amendments and Additions to Some Legislative Acts of the Republic of Kazakhstan on the Restoration of Economic Growth,’ which is planned to be adopted by the end of this year,’’ Birzhan Nurymbetov said.

The head of the ministry clarified that the right to use part of their pension savings for targeted needs will be available to:

What is “threshold of sufficiency” for?

According to Nurymbetov, a funded pension system has been introduced in Kazakhstan since 1998. Every working citizen deducts 10% from his earnings to the accumulative pension fund. When a person reaches retirement age, he has three sources of receiving a pension: an old-age pension at the expense of the state budget, a basic pension payment, and his own savings from the accumulation fund.

The “threshold of sufficiency” will be officially approved by the relevant Government Decree. This year, the “sufficiency threshold” has been halved. At the same time, the “thresholds” for women and men are equalized.

“At the same time, the calculation is done in such a way that a person will receive at least a minimum wage and deduct 10% from there until reaching retirement age. Of course, the calculations use and take into account the investment income provided by the UAPF, possible changes in minimum standards, minimum wages, and minimum pension. Therefore, it is assumed that this ‘threshold of sufficiency’ will be recalculated and announced every year,” the minister explained.

For what purposes can pension savings be used?

“We went broader on housing issues. They offered not only the purchase of housing, but also the use to improve housing conditions,” Nurymbetov said.

That is, at the expense of funds that can be withdrawn from the accumulation fund, you can purchase housing or land, both new and in the secondary market. Can be used as a down payment for a mortgage. Can be directed towards paying off an existing mortgage or refinancing a mortgage. At the same time, it does not matter in which bank this mortgage was issued or where the housing was purchased. Also, funds can be used to expand housing conditions and repair.

“We do not limit here either. The savings can be used not only for oneself, it can be used for close relatives — grandfathers, grandmothers, parents, children, brothers, sisters, grandchildren,” the minister said.

To ensure the targeted use of funds, a single operator will operate, which, at the request of citizens, will interact with the Unified Accumulative Pension Fund and transfer the available funds to the seller of housing or the bank where the mortgage that needs to be closed is issued.

In terms of receiving savings for treatment, Nurymbetov noted that the funds can be used if medical organizations in Kazakhstan cannot provide treatment or surgery for free. In this case, the citizen can use the accumulated funds. Here in the regions, health authorities will operate, which will confirm that they cannot provide this treatment service for free. At the request of citizens, a single operator in this area, interacting with the accumulative pension fund, will transfer the accumulated funds to the account of the clinic or hospital where the treatment will take place.

When developing new code, all proposals from public will be taken into account

Also, the Head of State instructed to start work on the consolidation of social legislation by developing and adopting the Social Security Code.

In this regard, Birzhan Nurymbetov noted that at present the citizens of the republic are provided with a wide range of social security measures, which are regulated by 17 laws and more than 100 by-laws. At the same time, various indicators are the basis for calculating the size of payments in the field of social security: the monthly calculation index, the subsistence minimum, the minimum wage, etc.

“In order to simplify and qualitatively improve the perception of legislation in the field of social security, it will be consolidated into a single Code. Its concept will be developed in the second quarter of 2021, after which the development of the Social Security Code itself will begin on its basis. This will be a very important document, therefore, work on it requires a wide discussion with the public, we will accept and consider all proposals,” said the head of the ministry. At the same time, the minister clarified that when developing the Code, the existing laws in the field of social security will not only be combined, but also social support measures will be systematized in general, issues of linking the amount of payments in the field of social security to a single social indicator (standard) and others will be considered.

“Today a working group has been created in the ministry, which is developing a working version of the concept and working approaches. After that, we will move on to the stage of general discussion of these projects,” the minister said, noting that today citizens can submit their proposals and take an active part in this work.

Digitalization of social payments through introduction of e-wallet

In addition, in his Address to the people of Kazakhstan, the Head of State instructed to take measures to digitalize social payments through the introduction of a citizen's e-wallet.

As Birzhan Nurymbetov noted, today, when assigning social payments, it is necessary to have an IBAN card account; to open it, you must visit a bank, which creates additional difficulties for recipients of social payments.

“In order to facilitate the receipt of social assistance, the ministry is working on the issue of assigning social payments to the e-wallet , which will be opened by default by IIN, while the recipient can change the method of crediting to a bank card. To ensure the safety of funds, it is proposed to use the electronic money of the National Bank of the Republic of Kazakhstan in the wallet,” the minister informed.

In addition, a special mobile application will be created that will allow you to access the wallet, find out its balance and pay for goods, works or services using a barcode QR code without any commissions.

Today, the ministries of labor and social protection of the population, trade and integration, digital development, innovation and aerospace industry, together with the National Bank, are carrying out this work. Today, work is underway on technical solutions and the development of proposals for changing legislation. At the first stage, starting next year, it is planned to transfer the targeted social assistance to the social wallet and, after successful testing, transfer all other social payments.

How labor market in Kazakhstan will change with repeated strict quarantine

Answering the questions of journalists, the Minister of Labor and Social Protection of the Population emphasized that the Government is taking all measures to maintain a stable epidemiological situation in the country and prevent deterioration.

“Last time the minister of healthcare presented three possible development scenarios for your attention, as well as the announcement of a lockdown. But we do not know what scenario might take place. We hope that all citizens will comply with the quarantine. If the situation gets worse, the government will take measures to support the economy, business and population. But it's too early to talk about specific payments and amounts,” Nurymbetov explained.

However, according to him, the ministry made a forecast on this issue and assessed the situation. For example, a worst-case assessment was made by the workforce development center.

Having imposed the current situation on the labor market, if we speak in general terms, if there is a deterioration, then about 4.5 million people will retain their jobs. This is primarily construction, agriculture and health care, the minister said.

“Most likely they will go on paid or unpaid leave. Plus, if there is a strict quarantine, like last time, then about 160 thousand more people can be fired and become unemployed,” said the head of the Ministry of Labor.

He added that after analyzing the labor market, it turned out that the spring lockdown did not dramatically affect the unemployment rate, as it had a greater impact on the reduction in working hours.

Today, according to official statistics, the unemployment rate is 5%. This is 454 thousand people. But there is still another figure, namely for persons who are out of employment. They are not fired, but they do not have the opportunity to work — 536 thousand. That is, about a million people are out of active employment.

“It fits in somewhere with the assessment that our workforce center makes. If there is a severe quarantine, which was in April-May, then the labor market will have such consequences. Of those citizens who are now out of active employment, can go to the pool of unemployed, then the forecast will be 5-6%,” Nurymbetov noted.

Will retirement age go down?

According to the minister, in any country, the solution to the issues of reducing or raising the retirement age is not solved overnight. It should always be based on research, long-term forecasts, taking into account economic, demographic factors, issues of the ratio of the working population and pensioners. The dynamics of population aging is also taken into account.

According to him, there is a three-tier pension system in Kazakhstan — that is, the size of pensions is tied to the length of service.

These are old-age pension, basic pension payments from the state budget and funded pensions. In any of the types, the size of the pension is tied to the length of service, that is, the longer the length of service, the higher the size of the pension. It is necessary to take into account the situation on the labor market and the dynamics of population aging.

“For example, if 10 years ago the ratio of pensioners to the working population was 20%, that is, five employees per pensioner, now this figure has exceeded 30%. On the other hand, the aging of the population also affects our country, according to statistics, the number and share of citizens over 65 years old exceeded the 7% threshold - if five years ago it was 6.8%, now it is 7.7%. This tendency all over the world: 16-17% in the USA, more than 20% in Europe, 15.5% in Russia, that is, all these points are taken into account with other countries. Now in the world all countries, on the contrary, are going to raise the retirement age. therefore, taking into account all these factors and all the indicators that I said, today the issue of lowering the retirement age is not being considered in Kazakhstan,” explained Nurymbetov.