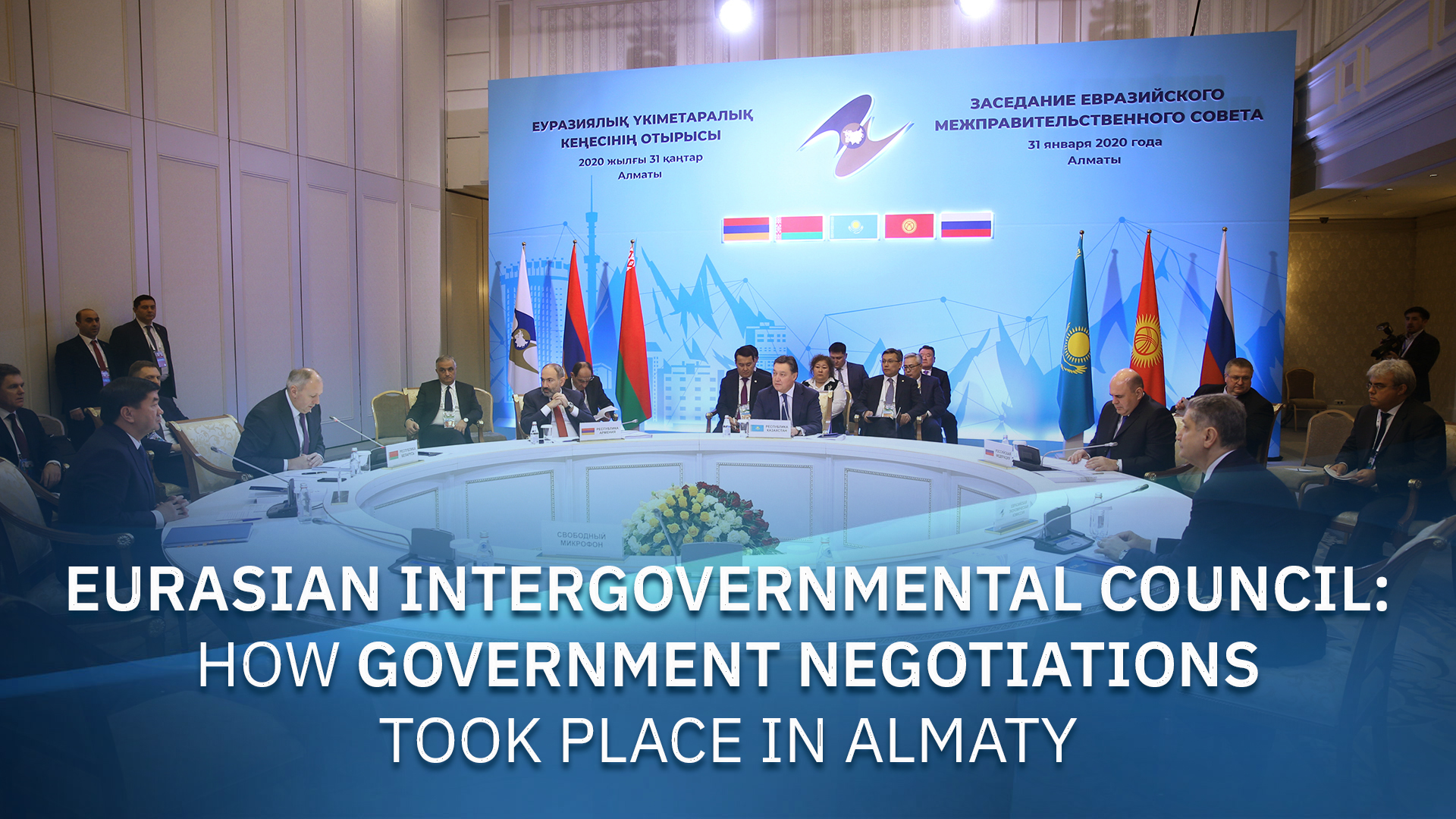 On Jan. 31, 2020, a meeting of the Eurasian Intergovernmental Council was held in Almaty, where important decisions were made, including in the areas of trade cooperation, removing barriers, integrating national information systems and others. The Kazakh delegation was led by Prime Minister Askar Mamin.

Traditionally, the meeting of the Intergovernmental Council was held in narrow and extended compositions.

In a narrow composition, an exchange of views took place on pressing issues of interaction within the EAEU. A wide range of issues of fundamental importance for the development of strengthening the integration association was considered. In particular, the progress of the elimination of barriers by the EAEU member states within the framework of the functioning of the Union’s internal market was reviewed. A progress report on the draft Agreement on the regulation of the alcohol market within the framework of the Eurasian Economic Union was also heard.

In total, 14 issues were considered, aimed at developing trade and economic cooperation of the EAEU member states.

Opening the Council meeting, Prime Minister Askar Mamin noted that 2019 has become significant for the development of the EAEU and very productive.

“Firstly, we celebrated the five-year anniversary of the functioning of the integration association, laid the foundation for new horizons for the development of integration processes for the next five-year period, adopted a number of important documents, reached mutually beneficial agreements on the current and further development of the EAEU, signed the Shipping Agreement, and formed the legal basis for creating of the general electric power market, the Concept of forming a common financial market has been approved,” Mamin said.

The Prime Minister of Belarus Sergei Rumas, as the representative of the party that took over the chairmanship of the EAEU bodies from Jan. 1, 2020, noted that the Belarusian side intends to make every effort to further the progressive development of Eurasian integration.

“First of all, our attention will be focused on the work on removing barriers, removing restrictions on the EAEU markets, as well as on preventing the possibility of new types of obstacles,” said Sergei Rumas.

One of the tools to achieve this goal is to strengthen the supranational competence of the EEC primarily in such areas as technical regulation, the application of sanitary, veterinary and phytosanitary measures, the implementation of public procurement, and the provision of subsidies.

The Prime Minister of the Republic of Armenia Nikol Pashinyan spoke in support of the priority area of ​​integration identified by Belarus. He emphasized the importance of eliminating the remaining barriers to the formation of a common economic space, and pointed out the need to intensify efforts aimed at creating an energy and transport market in the EAEU with non-discriminatory approaches to pricing in tariffs and access to services of natural monopolies.

“Improving the efficiency of the Union’s bodies and the development of transport and logistics infrastructure is another area that should be our focus. The Republic of Armenia traditionally actively participates and supports the process of creating and implementing the EAEU digital agenda. We believe that the formation of an ecosystem of digital transport corridors will provide an opportunity to reduce the distance between the consumer of goods and services and the manufacturer and seller. It will significantly reduce the delivery time and time to search for optimal ways and methods of moving goods, making the market better in this regard,” said the prime minister of Armenia.

Kyrgyz Prime Minister Muhammedkaliy Abulgaziev, in turn, noted that the Kyrgyz side attaches great importance to cooperation within the Union on the basis of the principles of equality, trust and mutually beneficial cooperation.

“The principle of taking into account national interests and forming additional sources of economic growth of its member states should be the basis for determining the common goals and objectives of the EAEU economic development. The Kyrgyz Republic will strive to deepen cooperation and improve integration processes in order to further develop the Union,” Abulgaziev emphasized.

The Chairman of the Government of the Republic of Kazakhstan Mikhail Mishustin said that Russia positively assesses the dynamics of Eurasian integration in all major areas of activity. First of all, this is the work of the common market. However, supranational regulation is becoming more effective.

“We set a goal — to ensure the growth of the economies of the five countries so that people who live in the Union feel the benefits of a common space and can enjoy equal opportunities,” said the head of the Russian Government.

It was noted that in the first three quarters of 2019, the total GDP of the Union increased by 1.4%, industrial growth in agriculture amounted to 2.7%.

The conclusion of the discussion in a wide format was the signing by the heads of government of a number of documents aimed at further integration of the EAEU member countries. In total, 10 documents were signed.

Prime Minister of Russia Mikhail Mishustin presented the Stolypin Medal of the First Degree to the Chair of the Board of the Eurasian Economic Commission Tigran Sargsyan for his services in the development and strengthening of the EAEU.

“As the chair of the EEC collegium, you and your colleagues have successfully passed the most difficult stage of its formation, and the formation of the Eurasian Economic Union. I want to thank you for this great work and, taking this opportunity, as I said, to congratulate you on the anniversary that you recently celebrated, wish you good health, continued success, and I am sure that everyone present will support me,” Mishustin said.

The main results of the negotiations were announced by the Prime Minister of the Republic of Belarus Sergei Rumas and the Chair of the EEC Board Tigran Sargsyan during the press conference.

The next meeting of the Eurasian Intergovernmental Council will be held on April 9-10 in Minsk.